9-days snow forecast from Vemdalsskalet
What do you think about Vemdalsskalet?
Write a review
5
4
3
2
1
3.9
27 reviews

Ivo
Note! This text has been translated by Google Translate.
Show original

Efficient, connectable lifts guarantee broken slopes.
Is there even an off-piste (seems to be the blast everywhere)?

It is built everywhere. In some kind of usa inspired ski resort style.
The whole place breathes "buy-high-mortgaged-condominium-with-ski-in / out".

If you like Skistar's mass tourism, you have come to the right place

Interesting mix of feeling between neighborhood hill and really big facility. Long slopes with a good slope and fast and efficient lifts. Scattered accommodation and not so many lunch options out in the system. However, we had a fantastic weekend thanks to really good snow. Very good that you can ride everything from blue to black and still meet in the same lift.

Eriksson (Guest)
Note! This text has been translated by Google Translate.
Show original

Awesome good, family friendly.
The restaurant supply and grocery store are good.
A little more varied riding than in Björnrike ..

joak73
Note! This text has been translated by Google Translate.
Show original

In the winter of 2020 we made our first trip to the Vemdalsskalet with the aim of allowing the children to have some real winter and to start skiing. After a little discussion we got stuck to stay in Skalpasset in Lodgen where in nice apartments with self catering but also access to restaurant and pizza in the next house where there was also ski rental and housing service. It is a perfect ski in and out location where you 100m away have a lift that gives you access to the entire Vemdalsskalet slopes in a very convenient way. If you miss something, take the car or bus to Vemdalsskalet about 1.5 km away o ICA or other stores. The slopes in the shell fit the beginners perfectly so after 4 days at the ski school you have a son who from never been on skis goes down himself without any problems, same with lift and even large sitting lift. Lovely feeling as a parent to see o feel the development that 1 hour a day can give. Good variety on slopes even for those of us who have ridden a little more and you can always find some lee if it is windy. Björnrike may be even more child friendly but for us there were some successful days in Skalpasset.

Maria (Guest)
Note! This text has been translated by Google Translate.
Show original

We visited Vemdalsskalet V. 6, we do this almost every year because it suits the whole family. At Hovdeliften the slopes stay nice for a long time and that is the most fun we think (although the 8-year-old thinks it is a little steep in some places). In the slopes around Skalpasset we find that there are often more riders and the slopes get up faster. The staff around the slopes are always pleasant and accommodating and the ski school works well. There are a lot of other options for those who do not want to go on the slopes (horseback riding some days, gym, nice long tracks, restaurants, some shops with good range and of course after ski).

Spent Christmas 2018 there with the family.
Cozy place with a little alpine feeling. The right wind-sensitive system, but if you live near the shell's square, you can get around quite well in the system even when the seat lifts to the top are closed.
Compared to Björnrike, the ski system in Skalet feels a bit bigger, but I would still rate both slopes and off-piste in Björnrike a little higher.
Regardless, the whole of Vemdalen is a great ski resort.

Kaplawawaow (Guest)
Note! This text has been translated by Google Translate.
Show original

A big lift after being 13 years old in the seal, plenty of chairlifts, longer slopes and huge long tracks that you can also get in. Something that draws the grade slightly is that many chairlifts were closed as it blows a lot, which in the Vemdalsskalet paralyzes almost the entire system. However, it will be pretty much for it to happen, but it may be worth noting anyway.

S_Geust
Note! This text has been translated by Google Translate.
Show original

+ The park has many different jumps green, red and black and the lands are steep!
+ offpist, Vemdalen has nice offpiste "backs"!
+ The cottages, nice cabins.
+ The ski shop has very good range and good prices.
+ Steep slopes!
- Cold when I've been there
- too little rails in the park
- No handrail

Dennis (Guest)
Note! This text has been translated by Google Translate.
Show original

Must pay tribute to Vemdalen a little after reading all the news for the winter of 2011/12. For several years now there have been new fast lifts, new slopes and expansion of residences similar to the development rate in the Alps more than in the Swedish mountains. While other systems are dreaming of new lifts, slopes etc., it is invested and built in Vemdalen!

New 6-chair lift this year will remove all queues down in the children's area and in addition 3 new houses that are the beginning of a brand new city on the shelf. Looks horribly on the pictures (in the valsal) and will definitely increase the feeling of a ski center. Like! Dessuotm new children's lift, new children's lift / back in Klövsjö and new restauragn and the accommodation in Björnriket at Grizzly.

Vemdalsskalet now has 3 chairlifts on 2 mountains and for me who love fast carving, chairlifts and variation there is a good ride down towards Hovdeliften, down to the west lifts and on Skalet. At Hovdetoppen there is also the mountain's most cozy restaurant. If you are in Vemdalen during the winter when there are minus degrees you get maximum skiing without queues in the lifts, no congestion in the slopes and slopes that keep without bulges and ice from morning to evening!

Are you there for a week, I also recommend Klövsjö where there are usually even smaller people and cannon-prepared slopes.

To everyone who goes to Sälen, try real mountains with better rides and smaller queues instead and take the Vemdalen! (I do not usually go to Funäsdalen / Tänndalen because of a nearby cottage, but they have not been able to renew the same as Stolliftar and cozy accommodations. More snack than a workshop there .. but good snow and no queues! = P)

Sjobeck
Note! This text has been translated by Google Translate.
Show original

Vemdalsskalet is a very nice little ski resort!
+ New park has become a cannon! With nice step ups and steep landings! Persan From the ski school has done an excellent job and laid down soul in that park!
+ Great slopes and not so many people!
+ Out life is pretty good island on weekends! tip! try to fit the week with something a little bigger event like a forum or ski week!

Recommends the Skalet for people who want a lot of ski rides for less money! 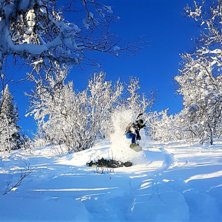 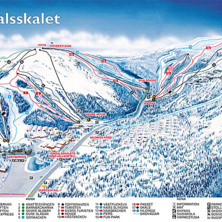