Niclas (Guest)
Note! This text has been translated by Google Translate.
Show original

Fantastic restaurants and lovely slopes, maybe a little short hills when there is no possibility of the easily accessible off-piste skiing.

Lararen
Note! This text has been translated by Google Translate.
Show original

Were there in week 5 2017. Failed to dot some beautiful snow days more than a few inches. The sun shone with its presence and made it really pleasant at the restaurants on the slopes. Grandvalira ski resort consists of Encamp, Canillo, Soldeu, Pas de la Casa, El Tarter and Grau-Roig. Grandvalira is perfectly suited for families with children or the lifeguard who wants to sour oysters on the slopes. The backs were well-puffed and long, but the right flat. Off-piste areas there were some of, however, very uproar.
The Soldeu area had a good range of afterski bars, including The Harp, Aspen and Fat Alberts to name a few. Recommended for the butterfly who wants sun.

Andmayer
Note! This text has been translated by Google Translate.
Show original

I live in Andorra and run Reyam Adventure - which organizes business trips and Freestyle camps for young people.
Please see link below for more info.

Andorra is a paradise, world-class skiing - both parks with Swedish top standard and offpiste, sun 300 days / year (it's no joke) and really good food and shopping .. It's said to be cheap and everything is relative but compared to seal and ears so you can call it affordable. If you have any questions, please contact us directly on our Facebook page Reyam Adventure, please visit the facebook group Swedes in Andorra to get local info on site.

Andorra's 4 ski system was really a surprise to go there, where in March-06 there was a lot of snow, dry nice powder all week. There were many places for off-piste and the most of the climb above the tree line has been in many places in the Alps but Andorra easily bounces out many famous resorts. Do you think they are a must have their own car, since communications between ski resorts or backs and homes are total andorra as city is quite boring there is nothing cozy about it and lots of car queues another option is to find hotels by the lifts

Judas
Note! This text has been translated by Google Translate.
Show original

Hello oh hope .. take me the big honor to tell me about this little paradise .. my dear sister has been living in the small village soldeu for some time and have spent some time here me .. that's where i try to go board for first gg ..

Because I did not go anywhere else, I can not unfortunately compare to anything else .. but please say that they can ride .. maybe not for the most extreme advanced rider but definitely if you're an intermediate rider as I have this place everything to offer ... lift system to curse ... and that they are free of charge do not make the worse just ... pity that more Swedes have not found here yet ...

Please email me if you have any questions. 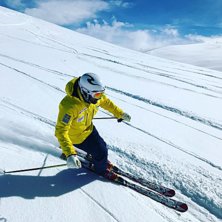