dompow
Note! This text has been translated by Google Translate.
Show original

What an experience! Below is a summary of the different ski areas in Hakuba we came in contact with.

We went to Hakuba week 5, 2019. FWT2019 was there the week before and you can check out the conditions that met us. The year before, Jon Olsson had visited Hakuba and his films may also be worth watching. However, it may be good to know that the week before FWT2019 conditions were not good at all, and the day after we went on it rained. But we did really well and came to try the different ski systems that make up Hakuba. The first morning we took a taxi (to Cortina), but then came to take the ski buses ... with skis inside the bus. Japan is different and this with the ski buses feels like part of the different experience. Then riding chairlifts without a hitch, or somewhere to rest your skis / legs on, is another. In fact, some of the lifts may have been hanging around for a long time, but it's not for the lifts that you go to Japan. The lunches are "Japanese" and of course we encountered Japanese skiers in Pikachu suits. Then the snow was "Japanese" ... absolutely wonderful.

The snow conditions on the first day in Cortina were fantastic, but our favorite came to be Hakuba 47. In Cortina you do not need to take a course to go in specially blocked / sighted loose snow areas, but just to go. However, Cortina, but also the other areas of Hakuba, are not huge so be sure to be among the first, because you will not be alone on the snow. It's good to have learned the piste map because you don't want to stand and think about where to go. Cortina was great, but the disadvantage is that Cortina is far from the center of Hakuba and requires ski bus change to be reached, if you do not live there or in nearby areas.

We also went to Tsugaike Kogen and we probably rank it better than Cortina. Jon Olsson's Hakuba movie is from Tsugaike and we can only confirm that it is as good as he claims. In order to go in blocked / sighted loose snow areas you need to take a course here and sign an agreement that you are aware that it costs if they need to save one. I, as a parent, also think this concept is incredibly good. Then it may be good to know that Tsugaike has really steep areas, but some can go further down, where it becomes a little more human. There is also a serpentine piste in one of the areas, which can be used if you feel you need to get out of the area. Tsugaike can really be recommended.

Then we also went in Happo One, which is a more high alpine area with alpine feel. It was in these slopes that they held the alpine branches for the 1998 Olympics in Nagano / Hakuba. When we went in Happo One, it blew, and since it is not forest skiing the snow was pretty tightly packed. However, many were touring from the top station. Some we talked to had gone down the side facing Tsugaike / Cortina which looked pretty good but they had to walk a lot to get back to the village. Happo One is the largest ski area and under the right conditions it should be really good, but did not become our favorite.

Hakuba 47 we liked. It is also close to the center of Hakuba. If you have to go in blocked / sighted loose snow areas here you need to take a course, sign an agreement and go with a coverall. The agreement is based on the submission of the sweater at a time. They are very clear that if you miss it by a minute you will pay according to the agreement you signed. But this makes them really know if they need to go out and look for someone. Great system. Hakuba 47 is linked to Goryu, although the best loose snow areas are located in Hakuba 47.

If you go to Japan for the first time to ski, Hakuba is definitely a good alternative, but we would also go there again. That we could then easily take the bus / Shinkansen to Tokyo and tourists a few days did not make it worse. 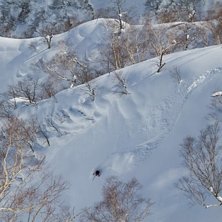