Happo One belong to Hakuba.

Chris Thorpe (Guest)
Happo One is by far the best ski resort I have been to yet. The snow generally for Japan is excellent and this season has been no exception. From the middle of December to early March you can expect fantastic snow and the mountain just at Happo One is big.

The backcountry out here is mostly run by one company down here however they offer tours really regularly and the variety of terrain to explore is endless. The pistes cater for all skiers needs from steeps to wide beginner areas and the off piste is accessible and good fun.

There are a number of parks available that don't have kickers any bigger than say 50ft but its still good. What's more, should you ski all of Happo One you can just nip along to Goryu or Hakuba 47 for a variation. Also, the amount of smaller resorts nearby can offer unique skiing adventures such as in Cortina or Iwatake. If there is a big dump overnight which happens regularly, rocking up early to one of these smaller resorts and flying through the trees in waist deep powder thats lighter than sugar is something that I'll remember forever and miss sorely when I role on to my next season.

All I can say is, dozo and you will not regret it!

mauliin
Note! This text has been translated by Google Translate.
Show original

We were nine people who did not feel each other particularly well but who booked us at Penke Panke Lodge in Happo One a few weeks in January and we had a totally unforgettable trip!

It was not hard to get there. It was quite okay to travel with Aeroflot via Moscow there (cheap, good flight and 14 hours including change) and from the airport we chose to traverse some trains so as not to miss that experience. There are train tickets that tourists can buy for four self-chosen days within a month, and we utilized. Five different trains took us six hours from Narita to Hakuba and there the hotel picked us up. That it was 3 or 4 minutes byte while there is snow weather is no problem in Japan, everything is coming and on time, and the conductors help as much as they can to tell when to leave.

The Penke Panke lodge was a goldgrain, it was Australians who owned it and they had a lodge for Panketo lodge which looked more like a fairytale castle and was 100 meters from the former. You got a good room with nice beds, breakfast in the morning (cornflakes, roast bread and a hot plate that varied every day), a kitchen to cook in and help and care with everything that could be needed. In the basement there was an onsen, which is their response to the Finns' sauna; Hot spring water flows somewhere and it enters each house so you can swim in mineral-rich natural warm water and make your muscles feel good after a long day on skis.

Everyday, one could choose to go to the various tours to the ATM (Japan is a lot of money), to the onsen at a more luxurious hotel or to the grocery store. The days when it dumped and you wanted a bus early in the morning to get to another system, they asked who would have shot and when - superb!

The skiing was good, it's big mountains and goes like the "Japanese Alps ". In Happo One you could get up to a peak and then go down one of three backs and come back to Happo, or go down to 47, which is the neighboring system. Great mountains with great opportunities!

Cortina was where we enjoyed the best. Unbeatably cheapest. You bought a day ticket everywhere else, and we did not get any coupon for Cortina, where lunch and the onsen bath at the luxury hotel was a good deal. In Cortina there are twice as much snow as in the rest of Hakuba and it is allowed to go wherever you want (otherwise off-road skiing is completely forbidden). The forest is just plain sparse, good slope and full of snow - just as you want it. In some places it was snowy, but there are plenty of good woodland so do not waste time stuck between the branches. Then there was at least a ladies' onsen on the third floor where you could see the afternoon sun look out between the clouds and dress the snowy mountains and the forests in a golden skinn while letting a waterfall massaging your shoulders and backs .... better.

The village had several restaurants with good food. Root's cafe recommended, they have organic and vegetarian food that is amazingly good. There is a company called Evergreens, and they have low prices and pathfinding that you can register for, but check it out in good time. The happening in Happo was good in the morning and late when the Japanese went home from their New Year's Eve (Jan. 6th grade). Iwatake is a system on the opposite side of the valley and there was a long and cozy piste and fun forest skiing that no one still got in three days after snowfall. When we went, we scared a family Kamoshikas, or "goat-beer-deer-thing" ... it's a clover that lives in the forests, as most people encounter sooner or later.

In addition to good accommodation, great food and skiing, mention is that Black Cat transports your ski equipment bags directly to the airport if you want to go back and flinch for a few days in Tokyo whenever you are there. Invaluable to avoid dragging around everything on trains, platforms and metrons.

It was not as huge amounts of snow as we could see down on Hokkaido, and it was not so cold that it became lightweight champagne pads. But when it snowed for five days, we enjoyed it and for four weeks it had come five feet of snow ... There are mountain peaks to climb but not so many helicopters that can pick up one that has to get back, which is a lot fun. And there are many Japanese who go skiing there so you really are in Japan, not an Australian tourist resort. Our idea of ​​ "to Japan, you probably only once in a lifetime " has been changed completely, we are definitely back! 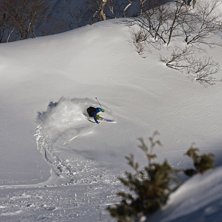