David (Guest)
One of my favorite destinations in Chile. Nevados de Chillan is a bit more off the radar compared to Portillo and Valle Nevado so it is rare to find long lift lines and tons of skier tracking out the resort.

The off-piste and backcountry terrain is the highlight. You can ski tour here for days, exploring nearby valleys, summiting the volcanoes, and ski some serious vertical.

That being said, currently the volcano is quite active so there are restrictions on where you can ski and tour. Updates are found on https://powderquest.com/ski-resorts/chile/nevados-de-chillan/

For lodging and hotels, the resort hosts 2 ski in ski out hotels. Alto Nevados is a bit higher up on the mountain and has the most updated rooms. If you are more on a budget and do not mind a daily drive you can save $ by staying in the village of Las Trancas.

Sugardaddy
Note! This text has been translated by Google Translate.
Show original

Review based on one week's stay in August 2011. The ski resort is called Nevados de Chillan.

We (me, my wife and two children, 2 and 4 years old) went there and stayed at Hotel Nevados De Chillan for a week.

Location: about 50 miles south of Santiago. The ski resort is located on the mountain, well there are most hotel complexes. The nearest town is the village of Las Trancas below the mountain, just over 5 km.

Get there:
Travel to Chillan by train from Santiago, the hotel picked us up at the station for transfer about 1.5 hours. The last bit on the mountain is on a dangerous gravel road, halfway up we stopped to put on snow chains.

accommodation:
Hotel Nevados de Chillan was good. It's not quite cheap to stay there, all inclusive, really nice warm outdoor pool, great food, great service, shady rooms. Nothing to complain about, good for the kids too. Childcare was also available. We also greeted at MI Lodge down in Las Trancas, as we rented our skis. Have dinner there, it seemed to be a very nice place to recommend if you want to live below the mountain.

Equipment:
They have ok stuff for shooting at the hotel, but nothing for the off-piste. We hired stuff of MI Lodge which, under some chaotic conditions, took us along the road up in Las Trancas. It turned out the day after my laws did not fit my puzzles so I had to change, considering the road it was a little meck and I rented the hotel one day, then I had ok lay.

skiing:
We had missed the weather, which is likely to happen here. Plus degrees, blunt and billy for the first 5 days, the top lift Otto, a diesel-powered old hedge, did not go. The alternative lift that goes half way up the mountain was broken and they were waiting for spare parts. Therefore, only those parts of the system that are located in the forest are open, and there is not much to cheer for, but you can get some forest skiing at least. It was mainly to go with the kids, the ahde iofs ski boot. Short days with the pool in the afternoon became the concept.
Last day, the weather was good, and beyond the 11th draw they had managed to release the Otto lift and opened. In with the kids to the babysitting after they had gone in the morning, then we had to see some of what the area could go for in a couple of hours. There is a lot of easy-to-reach offpiste for most levels except the real snowboard, it's easy to get back to the lift. It will be possible to do some cool excursions as well, but there was no time for us. Mainly, it's quite a rolling ride with a bit of slope for big ice creams, but the rope I did a couple of times ended with dropping down in a valley with about 100-altitude cross-country skiing, then sliding through the valley past some hot hot springs back to the lift (keep the skier's left from the top of Otto, it's quite easy). I found a couple of different ways down the valley, all of which were easy-to-find and easy to get out of. The ride is going well, think it's around 700 fall height meters, at that time it feels like a fantastic ride with it in August and we had not got up to the mountain in 5 days. The rest of the system he i never drive, but it seemed to be similar, rolling, quite simple but with fun little valleys to play in. In summary, quite ok area, comparable to a smaller area in the Alps. Weather-sensitive, and maybe not quite proficient always, given that an important lift stood still for several weeks.

We booked through a guy named Mark Lasseter, http://www.southamericaski.com/ who gave us a lot of help in choosing a place to go on and fix layers, train travel etc. The price I received from him for the entire trip was in line with the price that the hotel stated itself so his service became pure bonus for us. Recommended.

Chile was also very easy to travel in, their English is very limited but still many times better than my Spanish, and they would love to help.

fagel
Note! This text has been translated by Google Translate.
Show original

I was in Termas throughout September 2005.

The skiing in Termas is crazy. Unfortunately, I was there just at the end of the season so I had a slight lack of snow. But there was enough so you could go offpist almost everywhere and there was a lot of snow a couple of times when we were there.

Termas canxin is not really good for skiers. There is a small park but there are some plans to build a bigger park until next year, but the mountain owner is not entirely fond of snowboarders so he does not want to spend any money.
But for skiers, this is paradise when it comes to offpiste (when there is snow). You can go over all and there are all levels.

christianwiig
Note! This text has been translated by Google Translate.
Show original

Actually a very nice place, but in summer 03 there was quite little snow. It is expensive to stay up at the lifts. Also, stay at the HI hostel in La Trancas 6 km below. It is easy to get up and down the hill, but there is also a bus up in the morning and down in the evening. It costs approx. 100 SEK per night incl. a small breakfast and a pretty good dinner. If this is too expensive you can rent cabanas (cabins) close by, but there are only small mini mercados that have a bad selection if you want to cook the food yourself.

Easy access to free riding, very nice hike up on one of the volcanoes. Make sure the weather can change quickly. There is bad snowmobile knowledge so you have to take care of yourself.

Termas de Chillan is a small place but it is nice there and the two weeks i was there was very nice. 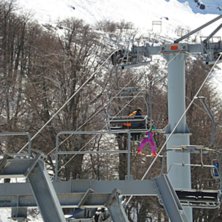 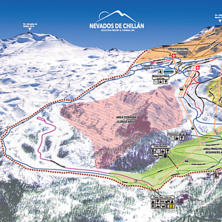