Erik (Guest)
Note! This text has been translated by Google Translate.
Show original

Nice place. Expensive as said but we went there from Santiago the most just after having left in Chile. It was a weekday towards the end of the season, Sep-Oct sometime. Buses, equipment and lift passes were bought at a travel center / bus station in Santiago. Not a jaw on the hill. Unfortunately, it only happened once, but skiing was really good. Little ice cream on their places only. It may have been up to 10-15 degrees hot. Remember that the Canadian national team trained there and that one of the few black slopes was suspended for that reason. Unfortunately, there is no further fall height-like in Åre about. However, the surroundings are impressive with peaks at the next 6000 around.

Oso71
Note! This text has been translated by Google Translate.
Show original

Valle Nevado is Chile's most modern ski resort with a real express lift, Well-kept but expensive place (More expensive than Sweden). The ride is good with slopes of varying degrees of difficulty as well as easily accessible off-piste directly at the express lifts. I think Valle Nevado is the first choice if you want to go skiing near Santiago (Several classes better than Portillo.) The only negative is the price level (significantly more expensive than, for example, Termas Chillan, Portillo, Corralco and Pucon). The road up from Santiago is beautiful but HORRIBLE. Mvh John and Marisel.

Svennebanan
Note! This text has been translated by Google Translate.
Show original

Went there at the end of September and it's a nice place, but it does not have a quiet terrain. Right flat, but with great possibilities for crouzing on large open fields.
Skiing is a real overclass sport here in Chile and counting around 500 bucks (40,000 CLP) per day with Travel ToR Santiago and lift passes. There are several food options, but it's relatively expensive to cheat. Staying at the hotel is paying about the same bullets as in Sweden after the numbers there is a $ sign and not SEK ...

The park was small but sick well managed when I was there.

mankan
Note! This text has been translated by Google Translate.
Show original

Valle Nevado is just one of three ski resorts that are interconnected. Together they tie together into a big system to be the one another. All races take place in violation of large open spaces and high availability of offpiste. Unfortunately, these resorts seem to be quite vulnerable to winds when we were there, it blew quite so vigorously every day which made the ride quite so bad, though, he got a really good day in El Colorado which is right next to Valle Nevado and La Prava. Everywhere you can find easily accessible offpiste. Ski resorts are approximately 1 hour from santiago by car, an alternative is to go skiing, driving minibuses up to the ski resort is probably easier and more convenient to live in santiago than on the mountain. The road up is really worth seeing 40 serpentine turns it takes before you reach the top !!

Traveled on a day trip to Valle Nevado from Buenos Aires in July 2003. Hotels in Santiago we arranged for cheap at the airport and rented a driver for the rest of the day (60USD). He waited up there until we were done for the day. All ski equipment including sunglasses were rented for 15USD.

Be was amazing but it had not snowed 3 weeks we were up there so the run was hard. The trails were excellently prepared, but the offpiste was run down. Admittedly, despite 3 weeks ago snow, I found a couple of places where I could go some "rides" in deep sea.
The reason I was told is that the locals almost stay on the slopes without exception, so it takes time for land to run.
The area itself has large surfaces where you can drive off piste, so the potential is great.

A map does not work, but there is another ski resort on the left with connection, but you have to buy a new lift card so we did not drive there.

What I remember most from the UN is the trip up from Santiago and the amazing view there.

Would I recommend VN? Well, if you are in South America anyway, call and check if there has been snowfall. If yes, book a ticket for 2 days. You do not hit many Scandinavians down there. 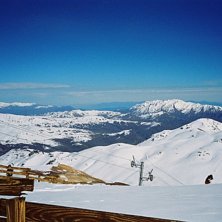 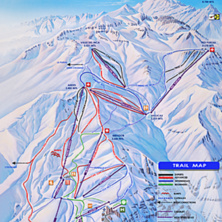